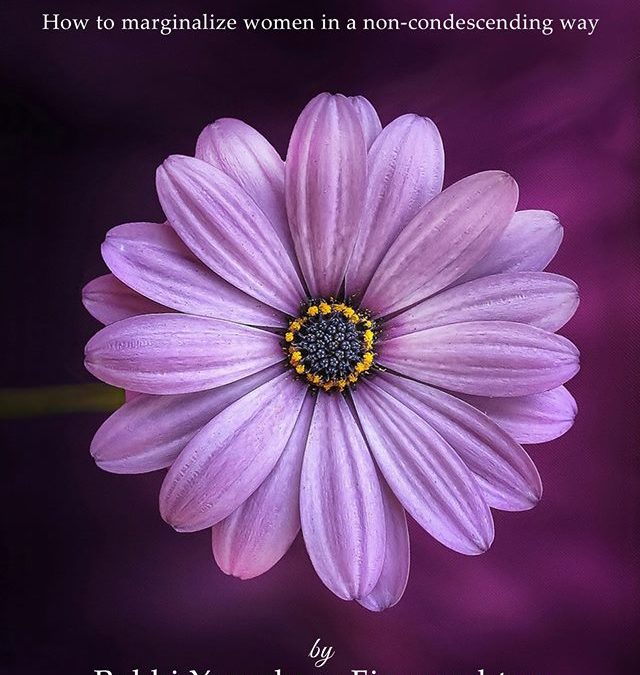 You’re the daughter of a King! A king! How awesome is that?

Not as awesome as being a son, apparently.

I’ve heard, ad nausem, all the apologetic explanations about how women are not less, they’re just DIFFERENT. How the true home is built around the Jewish woman (Look! Jewishness passes through the mother!).

But is that really what it looks like? I was always bothered by the fact that women had almost nothing they needed to DO to make them Jewish. They don’t need to pray, study, or do many of the actions we associate today with Jewishness. They mostly need to NOT do stuff, i.e. show their elbows.

So what makes a kind, positive, nurturing Jewish mother different than a kind, positive, nurturing gentile mother? If it’s all about the kind of kids you raise, “raising a Beautiful Jewish Family” (gag reflex), is the Jewish mother getting automatic bonus points just for being Jewish while she mothers? Meanwhile her husband needs to study in for 16 hours a day to achieve equivalent status.

As an aside, isn’t it kind of crazy that supposedly her entire portion the world to come is dependent on how much Torah her husband (and kids?) studies? Talk about results that are out of your control!

You’ll notice something interesting. While it’s usually the women complaining that they don’t get to do what men do, and the women are there supporting them, I feel the exact opposite. I was always jealous of how little it took to be “a good Jewish woman”.

Do I just need to cover my knees, and I can finish school at 2pm instead of 11pm like my sisters did? I’m down.
Do I just need to not eat treif nor feed it to others and God is totally thrilled with my existence? I like this religion.

As someone who always struggled with the amount of rules, their immense consequences, and the sheer responsibility of constantly trying to understand my role, it seemed like a Jewish woman had a much easier time of it all. For a woman, there are fewer rules to struggle with, and the role is simpler and clearer, even though it’s obviously second place from the perspective of the guys inventing it all.

She doesn’t need to struggle with wondering whether going to sleep at midnight instead of 1 o’clock in the morning is bittul torah. She doesn’t need to wake up at 7am to go pray for an hour. Heck, she’s not even obligated to get married or have kids (that’s the guy’s job, apparently) so even the whole parenting thing isn’t really a Jewish issue for her if she doesn’t want it to be.

The bottom line of all of this? It’s just not fair. It doesn’t take people’s individual personalities, preferences, strengths and weaknesses into account, which is my fundamental issue with organized religion.

Now is your point to sound like my grandfather and remind me that life’s not fair. True. Some people are born without legs. But usually, you can take whatever situation you’ve been handed and make the best of it – if you want, you can teach yourself to climb Everest without legs. You can tell the universe to suck it, fight against all odds to beat your limitations, and end up on Oprah one day.

Not so when your limitation has nothing to do with your circumstances. It’s imposed upon you be some ethereal force. It’s generated by your own mind, and you’re not supposed to fight it, only learn to live with it. It’s worse even than social gender or race biases, because there you can at least get up and fight, but here you’re told – by God Himself and his Chosen Emissaries – to bend over and take it.

And that’s a level of unfairness I’m not willing to live with. Like God giving cancer to babies to supposedly punish their parents. Except here you have the cure for this cancer, and yet you still have the biological males study Torah 24/7 and the biological females check rice for bugs, whether either of them is inclined to or not.