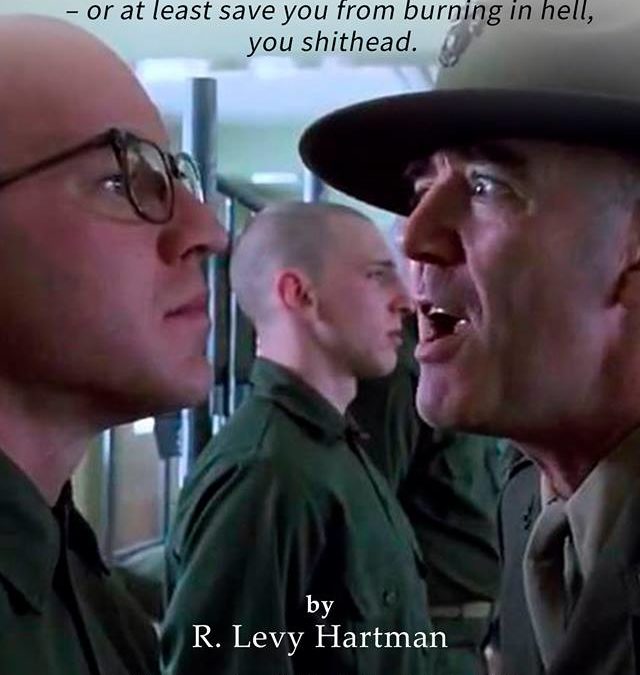 For intellectual honesty’s sake, I’ll acknowledge that this cover is a criticism of a specific strain of Jewish culture, namely the Mussar movement and its contemporary expression in (Israeli) Charedi society. It’s important for me to emphasize this because in general my criticisms are much broader, and pertain to Judaism as a whole – from its very roots and at its most basic tenants.

The Mussar movement, and its comical contemporary attempt at “making you a better person” by either instilling terror into your hearts or crushing the remnants of your psyche into God fearing oblivion, simply boggles my mind.

Aren’t we insanely hard on ourselves already? Don’t we already consume ourselves with guilt when we do something we know is not good for us? And yet every week in Yeshivas around the world (or at least in Israel) Thursday evening is traditionally the time for the Rosh Yeshiva / Mashgiach to stand in front of the students and tell them, in no uncertain terms, how much they suck.

There is so much they suck at. They suck bigly.

This, the whole year round. Let’s not even get started with Elul.

And I would sit there, at the front of the room, taking notes. Feeling terrible. Taking it more to heart than anyone else did, when really I was the one who least needed it: “I knew I sucked! Thanks for confirming it! I’m only 98% perfect, I promise to tear myself to shreds harder tomorrow.”

What should they really have been shouting? “You’re a fucking awesome person Shalom Tzvi. You try so hard. Are you sure you’re not overworking yourself? Go easy on yourself. RELAX THE FUCK DOWN, PRIVATE SHORE!!!”

Never have I seen an institution less thinly disguised as “being good for you”, than Mussar. It perfectly mirrors that asshole voice in your brain that tells you it’s there for your own good while simultaneously being the force that actually drags you down.

Cue the “we are pathetic beings, Mussar was invented in a timewhen we were stronger” and “that’s not actually Mussar, Mussar is really X, Y and Z (appearances to the contrary notwithstanding)” apologetics.

Why can we not, for once, read the actual abusive words and call the spade a spade? Why does some zelot always need to emerge from the crowd to try to convince me that “Mussar is simply recognizing truth. True mussar is done with lots of love, and in perfect recognition of your unique state.”

*blurgh* That’s the sound of me throwing up in my mouth a little.

Fun Trivia tidbit: The drill sergeant in Full Metal Jacket, portrayed here and one of my favorite movies, was named Sgt. Hartman. He was played by actor R. Lee Ermey. The combination is the inspiration for this cover’s Rabbi’s name.