The Epic,-By-Step Guide To Creating a Short Documentary-Style Film 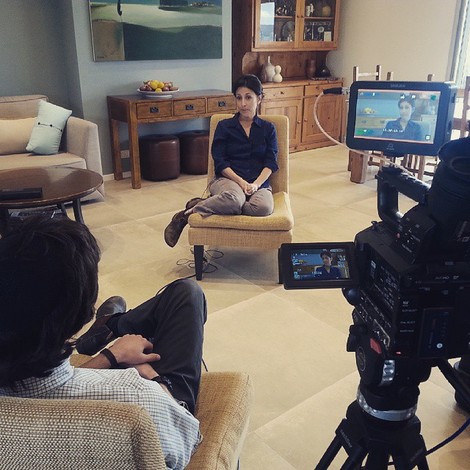 Interviewing for a film for Nefesh B’Nefesh, with the Jerusalem Media Group on the cameras. Photo by Daniel Shugert.

I have had the privilege of producing several documentaries of various lengths.

Here are several tips to produce a short film that revolving around interviews to make its point – a popular and time-honored way to make a point on film in a more affordable way. All films production takes time and usually financial investment, but filming regular people can make for a compelling film without having to resort to more expensive graphics and actors.

I’ll be focusing on the production and content side of things over the technicalities of filming and editing.

The success of a film usually lies in the amount of preparation that is done before hand. If you do your homework in advance, you can save hours of heartache later, and get a better film out of it as well.

1. Identify your goal and subject

What is the goal of your film? Is it to show how effective your organization is? Is it to demonstrate the importance of a specific cause? Write down the main concept of the film, and then identify three points that will illustrate this goal.

For example, your points could be: 1. Cats do not get the rights they deserve, but 2. Cats are actually important for the survival of the human race, which therefore means that 3. Our important work to promote cat rights is actually beneficial to all of society.

Write a list of questions that will prompt your interviewees to give you the answers you want. You can be pretty suggestive with your questions – this is not a democracy, you have a specific agenda you are trying to push. If you want people to talk about how much you’ve helped cats, don’t ask “Has Crazed4Cats helped felines?”, rather, ask “In what way has Crazed4Cats helped?” Imply the message in the question itself.

Don’t be afraid to ask questions that don’t directly relate to your topic, or to ask the same question again in a different way. Every time a person responds you will have additional material to work with, and a couple extra minutes during an interview can result in a great quote to use later on – you never know what response you will get to which question.

This is pretty straightforward – identify people who have positive views about your film’s topic. Generally, you won’t want people to criticize you in a film that you have made.

It can help to have a balance between experts, beneficiaries, and those who are actually doing the work. This will provide multiple perspectives on the topic while still making the same specific point.

I strongly suggest selecting your interviewees based on how articulate they are. More important than how they look, or even how much of an expert they are, the success of your film will depend on how well they make their point.

From my experience, it’s very hard to coach people to give you an answer in the way you want it if they don’t do it naturally – in other words, people either have it or they don’t, and I highly recommend screening them in advance, either by creating a demo reel for you or by showing you other videos they have been in. Do not make your decision based on how articulate they are in writing or even verbally, being on camera is a whole other ball game.

If you don’t screen your people in advance, know ye that you are playing Russian roulette with your time and resources – some people will be great, others will be awful.

Consider sending your interviewees the list of questions in advance – this will allow them to better prepare for their interview and might result in a better answer, but could also lead to the response sounding more canned and less candid.

Assuming you are a non-technical individual, you’ll need other people to set up the cameras (and lights, if needed) and do the actual filming for you. Even if you do know how to operate a camera, it’s best to have someone else on set to keep an eye on it while you focus on the interview (more on that later).

There should be no shortage of local film crews to film for you. If you are on a tight budget, consider finding a film school student – some of these people are very talented and much more affordable.

As always, a large number of service providers are terrible, so review their past projects before you sign with them. If you don’t know what to look for, ask a more savvy or artistic friend to have a look at their portfolio and give you their opinion – and remember, how much they are charging is not an indicator of how good or bad they actually are.

If you are not going to be doing the editing yourself, see if your film crew provides package deals – but again, make sure they are good, filming and editing are two different fields and excellence in one does not imply competence in the other.

Interviewing on the same shoot for Nefesh B’Nefesh, with the Jerusalem Media Group on the cameras. Photo by Daniel Shugert

You’ve got your goals, your questions, your interviewees and your film crew. You set a date and location, and you go to shoot your film. It’s production time!

Here are some tips to get the most out of your shoot:

If at all possible, be physically present during the filming. Whether or not you are asking the questions yourself, you are the owner of your project, and you know best if the composition of the shots – and the answers you are getting – are to your liking.

When you actually film your interviewee, there are a couple things to keep in mind that can result in a much better interview.

You want them to reply to the question “Is Crazed4Cats benefiting humanity?” with the answer, “Crazed4Cats is benefiting humanity in several ways. Firstly…” What you don’t want them to do is simply answer “Yes, they are.” It helps to ask open questions that don’t allow for yes and no answers, questions that begin with “in what ways” or “could you give me some examples”.

Sometimes you will just need to remind them to use full sentences, and a good way to do that is by saying “that was great, could you speak more about that topic (and don’t forget to mention the question when you are giving the answer)?”’

Show them you are listening by nodding your head, smiling, and acknowledging their points between answers. It’s great to refer to, and expand upon, the answers they give you, and not stay married to your questions.   But bear in mind that you should generally avoid the usual uh-hu’s and yesses that we normally pepper into our conversations to show we are listening – these sounds can show up in the film’s audio, so you want to keep your expressions of rapport non-verbal.

While you’r on your shoot, have the camera crew take shots of the surroundings, called B-roll in professional speak. This will help during editing to both break up the film and put something on screen other than the person’s face. It will also afford you flexibility when you come to edit the film – abrupt cuts that look weird visually but sound fine on the audio, now become possible. Setting up multiple cameras to film the interviewee from different angles also helps with both these things.

The subject of this B-roll can be as simple as the flowers on the table behind them, but of course it’s better if they illustrate the point they are making – cats frolicking in balls of yarn, or the interviewee feeding said cats.

Once you’ve filmed the footage for your video, it’s time to compile it into a film. This requires either you or an editor to slice it up, arrange it in a coherent way, and add music and title cards.

As the owner of your project, it will be up to you to provide direction and the overall message of the film. Editors are usually better adept with dealing with details, and can get very wrapped up in the nitty-gritty of the process. You need to stay focused on the bigger picture and make sure each component is leading towards that goal.

There is usually a direct correlation between how good a film is and how short it is. No one ever complained that a film is too short, just look at vine! And if they do, that’s an opportunity to make another film and fill the demand. Unless your last name is Scorsese, it is almost guaranteed that the shorter your film is, the better it will be.

So go ahead and start cutting, and be vicious.

It can be hard – “that was such a great line!”, “What a great point!”, but the more you stay true to your message and the value of brevity, the better off you will be. It might be tempting to have multiple people say the same thing to really drive the point home, but don’t. Pick the best example, and just use that. At every point, ask yourself the brutal question – is this line absolutely essential for the point of this film? Would you sacrifice your first born kitten to keep it in the film? If not, cut.

Remember this: a promotional film should almost never be longer than five minutes, max; usually a one minute-long film will actually be a lot more effective – and harder to make. As Blaise Pascal famously said “I would have written a shorter letter, but I did not have the time”.

When it comes to communicating with your film’s editor, there are only two ways to do it. In person (or via Skype), or in writing.

It takes a lot of time to sit by your editor’s side as they edit the film, but this will result in the ideal product. I spent many hours in front of a screen, watching my film’s editor work via Skype’s screenshare feature, and walking him through the film step-by-step.

If you choose to write to your editor, you will save time, but open yourself up to a lot of miscommunication. For longer films, it is much easier to pay to have the audio transcribed. The transcript will be sent to you with an accompanying time code, which you can then modify with the help of highlights and strikethroughs to indicate what you want to cut or move, and to where.

For shorter films, your editor can simply send you a draft for you to review. Mark every comment you have about a specific section of the film with the time code of that clip – indicating the minute and second in the film in which it occurs and writing a  couple words of dialogue that come right after it.

Since writing can lead to so many more misunderstandings, consider calling them up after you send it and walking them through your main points.

When it comes to creating your film, work forward from the big strokes of arranging the content in a coherent way, down to the finishing touches of smooth transitions, b-roll, music and title cards. Don’t freak out if the first draft of your film looks raw and unprofessional, focus on delivering the content in the best way possible (an interesting exercise can be listening the film with your eyes closed).

There you have it. Hopefully, if you pull all the pieces together, you will have a short, compelling film, which you then upload to the interwebs, and watch as it goes viral.

See you on the red carpet.